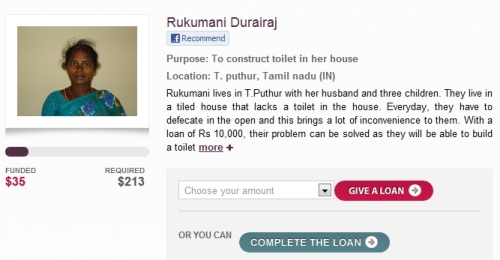 Social enterprise Milaap has set up an online microlending platform that enables anyone to give a household loan for the construction of a toilet or water connection for the poor in India. Based in Bangalore, India, with its headquarters in Singapore, Milaap was founded in June 2010 by Sourabh Sharma, Anoj Viswanathan and Mayukh Choudhury.

Milaap copied the basic concept from Kiva.org, the first mirco-credit crowd funding platform to improve livelihoods of the poor, but expanded its scope to not only include micro-enterprises but also sanitation, water, health care, renewable energy and vocational training. Whereas banking restrictions prevent US-based Kiva.org from serving clients in India, Milaap was able to gain approval from the Reserve Bank of India (RBI) to enable lenders outside India (especially Non-resident Indians or NRIs) to lend to India through their website.

As lenders provide their loans interest-free, local microfinance institutions (MFIs) with whom Milaap has partnered, can charge lower interest rates of 12-18% or half the normal rate. After the loan has been repaid, it will be returned to lenders as Milaap credits which they can either withdraw or re-lend to other borrowers.

Currently two of Milaap’s field partners provide micro-financing for sanitation and water: Guardian in Tamil Nadu state and Sakhi Samudaya Kosh (SSK) and Sakhi Retail in the state of Maharashtra.

2 responses to “India: crowd funding for sanitation and water”