A study by icddr,b researchers has demonstrated how combined water and sanitation interventions can significantly improve basic hygiene practices in rural communities. This and other encouraging findings were shared during a seminar organised by icddr,b on Thursday, 24th January 2013 in the Sasakawa Auditorium.

Findings of the pilot study carried out in low income communities in central Bangladesh, where handwashing with soap and treating drinking water were not commonly practiced, show that hand washing with soap jumped from 17 to 75% after rural communities received a combination of health messages and tailor-made hardware. 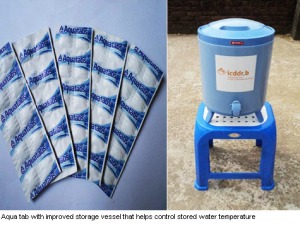 Some of the specially built products distributed amongst the target groups were handwashing stations (large plastic containers with a tap), which they could use to store clean water and soap, enabling them to wash hands, custom built hoes to remove human and animal waste, potties for children, and products such as soapy water made with detergent and chlorine tablets.

Behavioural change communication was a key strategy of the pilot study, and demonstrated how an effective combination of activities, supporting materials and trained and motivated promoters can change people’s behaviour and eventually people’s lives. Young children and their mothers were the primary target audience during this trial, followed by fathers and caregivers of young children and then neighbouring households in the same compound and the larger community.

The study was carried out among approximately 1,500 rural low income households from 2010 to 2012 to determine the most acceptable and feasible interventions for water treatment, sanitation, hand washing and nutrition to use in a large randomised controlled trial titled WASH Benefits. Presenters at the seminar also described that 62% of households were still treating their tube well water with chlorine tablets up to 13 months after the pilot intervention commenced. The study allowed researchers to refine the sanitation, handwashing and water quality interventions and identify hardware and behaviour change packages that result in high-level of uptake.

“This pilot study was crucial to help with decisions on the most viable interventions for the larger WASH Benefits trial,” said Dr. Stephen P. Luby, Professor of Medicine Stanford University, USA, and Principal Investigator of the WASH Benefits Project. “It also allowed us to refine our data collection instruments, behaviour change communication materials and methods and the overall study design. We hope that the WASH Benefits study will provide the Water, Sanitation and Hygiene sector with vital information on the child health benefits of combining interventions.”

The trials also included baseline and endline surveys to measure pilot intervention uptake. Qualitative assessments with community members provided feedback to aid selection of the most promising options for the randomised controlled trial. Mr. Abu Alam Md. Shahid Khan, Secretary, Ministry of LGRD & C, and chief guest at the seminar said, “I really appreciate that this study has worked with the community to understand local behaviors and tailor the interventions to fit the local context.”

Funded by the Bill and Melinda Gates Foundation, the WASH Benefits project is a sister study to a project being conducted in Kenya and involves collaborators from several USA based universities including University of California, Berkeley; Stanford University; Johns Hopkins University; State University of New York; University of Buffalo and Emory University.

Like Loading...
This entry was posted in Hygiene Promotion, South Asia and tagged Bangladesh, changing behaviour. Bookmark the permalink.

2 responses to “ICDDRB – Update on WASH and hygiene practices”