Excerpts – Zabaleen waste pickers are finally being re-integrated into the city’s services, a decade after they were sidelined. 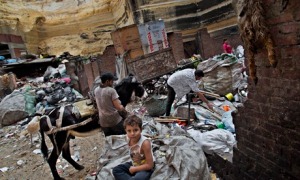 A family at work in the Mokattam area of the Egyptian capital Cairo, where zabaleen collect, separate, sell or reuse rubbish. Photograph: Bernat Armangue/AP

For the waste pickers that have traditionally made a living sifting through the mountain of discarded litter that blights the streets of Cairo, there has been scant cause for celebration these past 10 years. Marginalised by a 2004 Mubarak goverment directive that placed household waste collection in the hands of multinationals, their existence has been one of ever increasing struggle for steadily declining return.

But change is afoot. Government acceptance that the corporatisation of waste disposal in Egypt‘s capital has been a resounding failure has paved the way for the formal integration of the zabaleen – who, for more than half a century, went door to door gathering the vast majority of household waste in Cairo – into the city’s official refuse collection system.

For a community that has served Cairo well, the government’s U-turn offers a deserved chance to change their lives for the better. Before 2004, the zabaleen would take the rubbish they collected back to their homes on the edge of the city, sort through it, and make a living from selling the salvaged materials to factories and wholesalers. The remaining organic waste would be fed to their pigs, whose meat also brought them a steady income.

But 10 years ago, this informal arrangement came to an abrupt end when the Mubarak government contracted four corporate firms to do the work instead – cutting the 65,000 zabaleen out of the process, and wrecking their collective livelihood. The aim was to professionalise the capital’s waste management.

Government officials now admit that approach was flawed from the start, and for the first time are starting to make the zabaleen‘s role official, giving them uniforms and vehicles.

“The others have failed, be they the government or the foreign companies, and now [the zabaleen] should get a turn, having been sidelined for so long,” said Laila Iskandar, Egypt’s environment minister, who has prioritised the issue since her appointment in July. “They are the people who have the longest experience in refuse collection.”