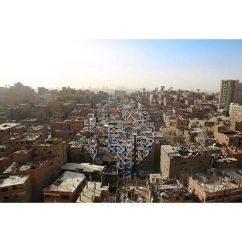 For decades, the Zabaleen have worked as unofficial sanitation experts, privately traveling door to door to collect the capital’s trash, return to their homes to sort through it and identify the salvaged materials that could be sold to factories and wholesalers. Most organic waste would be fed to the community’s pigs.

Informally, the Zabaleen developed one of the most efficient, cost-effective recycling systems in the region. According to The Guardian, they collect around 9,000 tons of garbage per day, which amounts to nearly two-thirds of the trash thrown away by Cairo’s inhabitants. On top of that, Laila Iskander, Egypt’s Minister of State for Environment Affairs, estimates the mini city boasts a recycling capacity of nearly 100 percent.

Despite the Zabaleen’s efforts, their quarter of Cairo is often viewed as nothing more than its nickname. “The place is perceived as dirty, marginalized and segregated,” street artist eL Seed wrote on his Facebook page this week. “In my new project ‘Perception,’ I am questioning the level of judgment and misconception society can unconsciously have upon a community based on their differences.”