The Guardian – Can mapping faecal flows cut the crap in developing cities?

Human waste often ends up in drains, rivers, fields and on beaches, but fast growing cities can use data grabs to improve their sanitation conditions

Rapid urbanisation in many parts of the developing world is putting an increasing strain on the ability of cities to deliver critical services such as water and sanitation. More than half of the world’s population – 54% – live in urban areas and some 700 million of them do not use an improved sanitation facility, where human waste is separated from human contact. 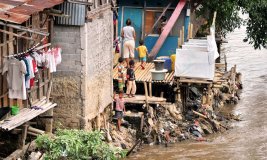 Children fish on a river bank in one of downtown Jakarta’s slum areas next to public toilets. Photograph: Bay Ismoyo/AFP/Getty Images

But even where there are such facilities, this does not necessarily translate into environmentally safe practices. More than two billion people in urban areas use toilets connected to septic tanks or latrine pits that are not safely emptied or that discharge raw sewage into open drains or surface waters. With another 2.5 billion people expected to live in cities by 2050, authorities urgently need to keep up with the growing urban population, ensure equitable access to improved sanitation, and safeguard the appropriate and environmentally-safe management of human waste.

Believe it or not, mapping the journey of faecal waste is an important part of the solution. IRC’s new sanitation assessment tool offers a simple representation of the volumes of sludge safely (and unsafely) dealt with at each stage of the sanitation chain, allowing city planners to determine where the biggest losses are and where to focus their (often limited) budgets.

Although tools to assess faecal sludge management (FSM) do already exist, they are either not able to include qualitative information or the scorecards they provide do not give adequate explanations for a bad score, nor do they provide actual volumes, which makes it difficult to translate the results into action. IRC’s tool, however, analyses the availability and enforcement of policy and legislation, and the presence of and adherence to health and safety through specific scorecards.

Like Loading...
This entry was posted in Technology, Uncategorized and tagged sanitation assessment tool. Bookmark the permalink.