At least a third of hospitals in developing nations do not have clean running water, a study has found, leading to unsanitary conditions and further spread of disease in drought-hit areas. 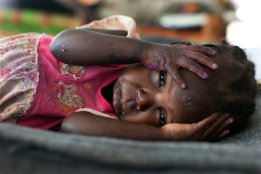 The study examined 430 hospitals in developing countries and found that one third of clinics did not have a reliable source of clean water to perform surgical operations.

Water availability ranged from 20 percent in Sierra Leone and Liberia to more than 90 percent in India, Malaysia and Guinea, according to the report, which used World Bank data and analysed previous studies between 2009 and 2015.

“Running water is something we take for granted and it doesn’t exist in a third of hospitals in these countries,” said Adam Kushner, lead author of the study, published in the Journal of Surgical Research.

“Instead of water just being there, some hospitals truck in water or collect it in rain barrels, with no guarantee of its cleanliness,” said Kushner, an adjunct professor at Johns Hopkins University who is also a surgeon.

Every year, half a million babies die before they are one-month-old due to a lack of clean water and safe sanitation in hospitals, according to a 2015 report by sanitation charity WaterAid and the World Health Organisation (WHO).

Like Loading...
This entry was posted in Sanitation and Health, Uncategorized and tagged hospitals. Bookmark the permalink.