Beyond hardware: how a portable sink can inspire behaviour change

Beyond hardware: how a portable sink can inspire behaviour change by Geoff Revell at WaterSHED | Source: WaterAid Blog, June 29, 2016 |

Despite having a cheap and simple fix that could prevent millions of deaths, how to encourage handwashing has puzzled WASH sector experts for years. The rate of handwashing with soap after using the toilet is still estimated to be only 16%. So how do we get people to wash their hands? Geoff Revell, Program Director at WaterAid partner NGO WaterSHED, explains how development of the HappyTap sheds light on new ways to target behaviour. 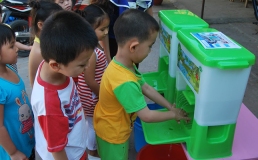 Awareness campaigns have long been the mainstay of public health efforts to improve handwashing, but on their own they are typically unsuccessful. A multi-year, large-scale behaviour-change campaign in Vietnam, led by World Bank and funded by the Bill & Melinda Gates Foundation, put the challenge in focus. The evaluation of the campaign concluded: ‘the intervention led to an increase in knowledge’, but ‘handwashing with soap behavior in the target population has not changed substantially as a result of the intervention, and thus no health or productivity impacts are found’.

Unfortunately, there is a persistent gap between knowledge and action; after years of education and promotion, many families understand when and why to wash their hands, but still aren’t doing it. Various studies, including one from Kyrgyzstan, have shown a link between the presence of handwashing facilities and rates of handwashing, suggesting a possible causal relationship. But is having more sanitary hardware enough to get people to routinely wash their hands?

It’s unlikely that any single intervention would be a silver bullet. However, although sanitary hardware might help improve rates of washing, we can go beyond the physical hardware and use facilities to reinforce and build on awareness. The HappyTap is the first such hardware designed with behaviour change front and centre. It’s a portable sink that not only delivers functionality, but also inspires change.

How can a handwashing station be more than the sum of its parts? Three crucial elements in the design and marketing help boost its success.

Like Loading...
This entry was posted in Emergency Sanitation and tagged behaviour change, handwashing. Bookmark the permalink.