Low coverage rates for clean water and sanitation leave Haiti exposed to significant health burdens. According to the latest estimates, 72% of Haiti’s population lack access to improved sanitation facilities and use either shared facilities, other improved facilities, or defecate in the open. 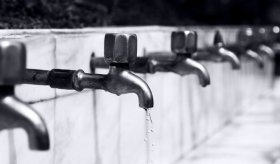 Between 2,000 and 4,500 people die each year from diarrheal disease. And the lack of basic water and sanitation services has contributed to the spread of waterborne diseases, including the cholera outbreak introduced by U.N. peacekeeping troops in 2010.

Better water and sanitation services would make it harder for such diseases to spread. But here, as in every other policy area, Haiti faces options.

Examining competing policy options is the purpose of the Haiti Priorise research project. More than 50 economists have written new research papers studying the costs and benefits of different proposals to improve the nation’s environmental, economic, and social conditions.

Like Loading...
This entry was posted in Latin America & Caribbean, Progress on Sanitation, Uncategorized and tagged Haiti. Bookmark the permalink.