Smart Cities are reinventing how we design cities of the future. By 2050 68% of the world’s population will live in cities. Rapid urbanisation is leading to smarter cities that improve the lives of citizens through technology. Yet sanitation is rarely considered as a priority in smart city strategies. 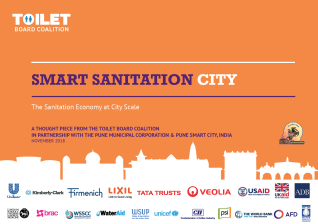 In India, the Government’s Smart Cities Mission launched in 2016 seeks to develop 100 cities across the country making them citizen friendly and sustainable.

There is a focus on efficiency, improved public services, goods, spaces, and modernisation of pubic services.

At the same time, in 2014 the Government of India launched its Swachh Bharat Mission with the objectives of eliminating open defecation through the construction of household-owned and community-owned toilets, while establishing an accountable mechanism of monitoring toilet use.

Linking the two national priorities presents a unique opportunity to make the sum greater than the whole of its parts.

Like Loading...
This entry was posted in Economic Benefits, Sanitary Facilities and tagged Toilet Board Coalition. Bookmark the permalink.