The other water crisis: one million jobs are missing yearly

The other water crisis: one million jobs are missing yearly. Equal Times, September 12, 2016 |

Experts are sounding the alarm over a growing jobs crisis in the global water sector. While there is much talk about the increasing water scarcity that will affect 1.8 billion people by 2025, and the need to support Goal Six of the Sustainable Development Goals which calls for the “availability and sustainable management of water and sanitation for all”, there is another issue: there aren’t enough skilled workers to keep the water sector running efficiently. 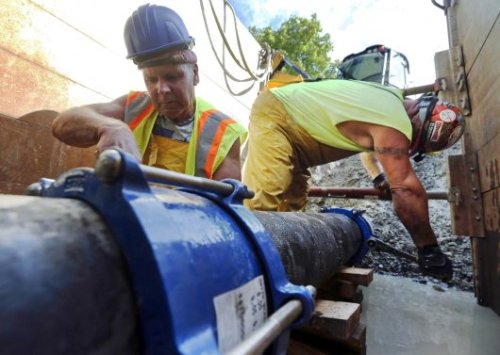 One million new water professionals, like these engineers working on a broken water main for the Syracuse Water Department in New York state, are needed ever year to plug the jobs gap in the sector. (AP/Mike Groll)

According to UN Water, 1.5 billion people – more than 40 per cent of the world’s total active workforce – work in water-related sectors, while nearly all jobs are water dependent.

Speaking at the at the World Water Week conference, which was held in Stockholm, Sweden from 28 August to 2 September, Ger Bergkemp, executive director of the International Water Association (IWA), said the number of water professionals is failing to keep pace with the world’s ever increasing water needs.

Nokuthula Mamkayi was one of hundreds of jobless youth in the Eastern Cape. Feeding her two young children presented a daily challenge. But all that changed this year for the young 28-year-old, with the rollout of a sanitation project in the Alfred Nzo District Municipality.

Ms Mamkayi is one of the 87 community members taking part in the rural household VIP Sanitation project in Potseng, which is part of the Expanded Public Works Programme (EPWP) started towards the end of 2004.

The project focuses on the manufacturing of materials to be used in the construction of the VIPs in villages including bricks, floor and roof slabs.

Ms Mamkayi, who is an orphan, told BuaNews that before the opportunity arose to work on the project, she used to go to bed at night with an empty stomach. But that is no longer the case.

“I’m now a person just like other people who are able to support their children and sleep with full stomachs, the project has saved my life,” she said.

The rollout of the project was hastened after the district was hit by severe storms, damaging houses and weak toilet facilities.

The district decided on brick and mortar structures moving away from the previous corrugated iron structures that always collapsed during storms and harsh weather conditions.

The project, which was also meant to address the high rate of unemployment within the district, is divided into seven zones and is run by a project steering committee with the communities making cement blocks, roof slabs, floor slabs and pedestals. The committee decides on and also leads the delivery of sanitation in rural areas.