Priorities for the WASH sector in Ethiopia: report from a multi-stakeholder forum

The annual Water, Sanitation and Hygiene (WASH) Multi-Stakeholder Forum (MSF) is the most important WASH sector event in Ethiopia with over 300 participants. The first WASH MSF was conducted in 2006 under the auspices of the European Union Water Initiative for WASH sector coordination. The Government Ethiopia’s WASH organisations (education, finance, health and water) took over the WASH sector coordination process later on and, since then, the Ministry of Water, Irrigation and Energy has led the National WASH Steering Committee and the organisation of the MSF. 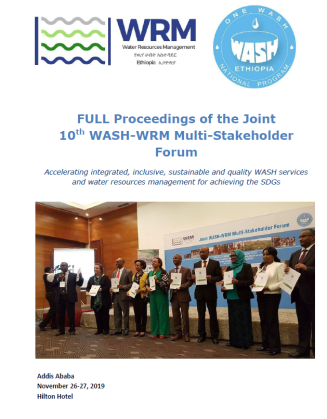 for the Joint WASH-WRM. The event was held in Addis Ababa on 26th-27th November under the theme “Accelerating integrated, inclusive, sustainable and quality WASH services and water resources management for achieving the SDGs”. Among the WASH topics discuss, it is relevant to highlight equity, inclusion and accessibility in WASH, WASH marketing, WASH financing gaps and financing and equity, quality in WASH, sustainability in WASH, climate-resilient water safety planning and WASH sector institutional capacity building. The MSF 10 also comprised the launch of Ethiopia’s Open Defecation Free Campaign (2020-24). 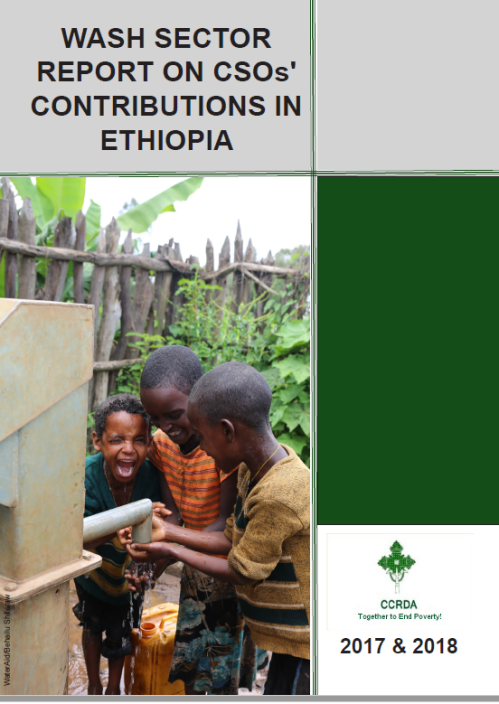 A new report presents data on contributions from 29 civil society organisations (CSOs) to the Ethiopian WASH sector in 2017-2018. The CSOs reached over 8 million people through the implementation of 658 WASH programmes with a total financial allocation that exceeded 2 billion Ethiopian Birr (US$ 61.9 million).

It also provides key recommendations and ways forward which relate to a) fostering the geographic diversification of WASH programmes; b) encouraging CSOs’ involvement in emergency areas; c) revisiting the urban sanitation and hygiene situation; d) focusing further on approaches to WASH that address gender disparities; and e) strengthening the existing national WASH platforms to foster further collaborations in the WASH sector and plan for more targeted WASH interventions.

Collective Efficacy: Development and Validation of a Measurement Scale for Use in Public Health and Development Programmes

Impact evaluations of water, sanitation, and hygiene interventions have demonstrated lower than expected health gains, in some cases due to low uptake and sustained adoption of interventions at a community level. These findings represent common challenges for public health and development programmes relying on collective action.

One possible explanation may be low collective efficacy (CE)—perceptions regarding a group’s ability to execute actions related to a common goal. The purpose of this study was to develop and validate a metric to assess factors related to CE. We conducted this research within a cluster-randomised sanitation and hygiene trial in Amhara, Ethiopia.

Exploratory and confirmatory factor analyses were carried out to examine underlying structures of CE for men and women in rural Ethiopia. We produced three CE scales: one each for men and women that allow for examinations of gender-specific mechanisms through which CE operates, and one 26-item CE scale that can be used across genders.

All scales demonstrated high construct validity. CE factor scores were significantly higher for men than women, even among household-level male-female dyads. These CE scales will allow implementers to better design and target community-level interventions, and examine the role of CE in the effectiveness of community-based programming.

Posted in Africa, Progress on Sanitation

Sanitation behavior change is a notoriously complex intervention. In the harsh, remote environment of the Ethiopian lowlands, this is particularly so. Community-Led Total Sanitation and Hygiene (CLTSH) interventions, while successful in Ethiopia’s densely populated highland areas, have never been implemented at scale in the lowlands.

We learned that in these communities, dominated by (semi-) pastoralist groups, that the operating conditions for effective, sustained behavior change are highly variable. A Collaborating, Learning and Adapting (CLA) approach helped the program team define, pivot and re-design activities that addressed project effectiveness.

Our experience is drawn from the USAID/Ethiopia-funded Lowland Water, Sanitation, and Hygiene (WASH) Activity that works to accelerate access to improved WASH in three rural lowland regions: Afar, Somali, and Southern Nations, Nationalities, and Peoples (SNNP).

END_OF_DOCUMENT_TOKEN_TO_BE_REPLACED

In many respects, Ethiopia’s lowlands represent the final frontier for the country’s ambitious plans to improve water, sanitation, and hygiene (WASH) coverage through its One WASH National Program.

These harsh, arid lands are home to predominantly pastoral communities that roam with their livestock in search of water and grazing lands. Water sources are few and far between, and even when available often do not provide safe drinking water.

Open defecation is the norm for a mobile population that lacks a fixed address upon which to build longer-lasting sanitation infrastructure.

Adding to these challenges are the pressures of regular droughts, depleted groundwater tables, and a lack of institutional capacity on the human and data side.

The true costs of participatory sanitation

Evidence on sanitation and hygiene program costs is used for many purposes. The few studies that report costs use top-down costing methods that are inaccurate and inappropriate. Community-led total sanitation (CLTS) is a participatory behaviour-change approach that presents difficulties for cost analysis. We used implementation tracking and bottom-up, activity-based costing to assess the process, program costs, and local investments for four CLTS interventions in Ghana and Ethiopia. Data collection included implementation checklists, surveys, and financial records review. Financial costs and value-of-time spent on CLTS by different actors were assessed. Results are disaggregated by intervention, cost category, actor, geographic area, and project month. The average household size was 4.0 people in Ghana, and 5.8 people in Ethiopia. The program cost of CLTS was $30.34–$81.56 per household targeted in Ghana, and $14.15–$19.21 in Ethiopia. Most program costs were from training for three of four interventions. Local investments ranged from $7.93–$22.36 per household targeted in Ghana, and $2.35–$3.41 in Ethiopia. This is the first study to present comprehensive, disaggregated costs of a sanitation and hygiene behaviour-change intervention. The findings can be used to inform policy and finance decisions, plan program scale-up, perform cost-effectiveness and benefit studies, and compare different interventions. The costing method is applicable to other public health behaviour-change programs. 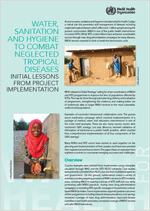 Water, sanitation and hygiene (WASH) are essential for preventing and managing diseases including neglected tropical diseases (NTD) which affect over 1 billion people among the poorest communities.

Closer coordination of WASH and NTD programmes is needed to ensure WASH services are reaching the most vulnerable populations. Many WASH and NTD actors have started to work together on the planning and implementation of their projects and have documented their experiences and lessons learnt.

The World Health Organization (WHO) has published a paper that draws on examples from eighteen countries to summarise emerging successes and challenges. Several examples relate to WASH in Schools projects. Two case studies are highlighted: the Lao PDR and Cambodia CL-SWASH initiative and the CARE Integrated WASH and NTDs Programme in Ethiopia.

The World Bank in Ethiopia has commissioned a rapid survey of what motivates people to upgrade their latrines, with the aim of delivering behaviour change communication materials with greater impact.

The survey is being conducted in four regions, with the main target audiences being adult women, male heads of households, opinion leaders and existing sanitation businesses.

The aim is to pilot and produce materials that emphasise the dignity, prestige and status of having improved sanitation, rather than focusing only on health messages.

The WB decided a new approach was needed after Demographic and Health Survey (DHS) figures for 2016 suggested that only 4% of rural households in Ethiopia have improved toilets facilities while a further 2% have facilities that would be considered improved if they were not shared. This is well below the Joint Monitoring Program figure of 28% for improved latrines (although we understand this may be revised down to around 14%). Indeed, according to DHS, although access to some form of sanitation has risen, access to an improved latrine has declined in percentage terms over the past ten years. Most latrines in rural areas (55%) do not have an effective slab or lid while more than a third of rural households (39%) practise open defecation.

The Government of Ethiopia has a flagship programme to increase use of improved latrines to 82% by 2020.

At a launch meeting in Addis on 23 March 2017, social market consultant, Addis Meleskachew, said that this initiative will develop a memorable brand for marketing materials that will encourage the private sector to provide materials and will attract rural families to buy them.

Dagnew Tadesse,Hygiene and Environmental Health Case Team Leader for Ministry of Health, welcomed the initiative to attract business but emphasised that the GoE approach is based on a comprehensive health education strategy with multiple messages including hygiene awareness, handwashing and safe food, and said that these important messages should not be abandoned.

Jane Bevan, rural WASH Manager at UNICEF Ethiopia offered to share extensive data that UNICEF has collected for its country programme on attitudes to sanitation, which has identified the high cost of concrete slabs as a significant obstacle. She presented examples of low cost options for upgrading sanitation in a pilot project in Tigray region. It was agreed to collate all existing KAP studies and relevant data including research by SNV.

Monte Achenbach from PSI and John Butterworth from IRC spoke about the work being started by USAID Transform WASH to market innovative sanitation models. John Butterworth said there is a need to make people aware of what is available and to get materials to where they are needed.

The World Bank research is being conducted by 251 Communications.

This blog was originally posted on 5 April 2017 on the IRC website.

Active trachoma and community use of sanitation, Ethiopia

Active trachoma and community use of sanitation, Ethiopia. WHO Bulletin, April 2017.

Objective – To investigate, in Amhara, Ethiopia, the association between prevalence of active trachoma among children aged 1–9 years and community sanitation usage.

Methods – Between 2011 and 2014, prevalence of trachoma and household pit latrine usage were measured in five population-based cross-sectional surveys.

Data on observed indicators of latrine use were aggregated into a measure of community sanitation usage calculated as the proportion of households with a latrine in use.

Multilevel logistic regression was used to estimate prevalence odds ratios (OR) and 95% confidence intervals (CI), adjusting for community, household and individual factors, and to evaluate modification by household latrine use and water access.

Conclusion – In Amhara, Ethiopia, a negative correlation was observed between community sanitation usage and prevalence of active trachoma among children, highlighting the need for continued efforts to encourage higher levels of sanitation usage and to support sustained use throughout the community, not simply at the household level.