Handwashing could save lives

Switzerland is backing an international campaign to promote the washing of hands with soap and water that could save over a million lives a year. (…) The campaign, supported by the Swiss Health Office and the Swiss Agency for Development and Cooperation, aims to ingrain the habit of washing hands before eating and after using the toilet. (…)

Global Handwashing Day is part of International Year of Sanitation

Posted in Campaigns and Events, Hygiene Promotion, Sanitation and Health

Millions of children around the world will be encouraged to wash their hands with soap on Wednesday to mark the UN’s first Global Handwashing Day.

The campaign, to be carried out in part by UNICEF, is designed to send the message that handwashing with soap is an easy and effective way to prevent diarrheal disease and pneumonia.

Sarah Crowe, spokeswoman for UNICEF in South Asia, told CBC News that 76 countries are taking part in the day. The campaign is expected to focus on children with events in schools. (…) 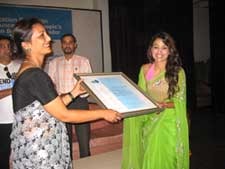 KATHMANDU, Sept 19 (PR) – The End Water Poverty Campaign (EWPC) in Nepal, a coalition of civil society members working in the sector of water and sanitation has nominated actress Jharana Thapa as a sanitation brand ambassador for a year at an awareness-raising function in Kathmandu on 19 September 2008. The nomination is a part of the celebration of the International Year of Sanitation 2008 in Nepal.

On August 1st, 2008, the United States Senate passed H.Con.Res 318, supporting the goals and ideals of the United Nations’ declaration of 2008 as the International Year of Sanitation. Introduced by Congressman Donald M. Payne and Senator Richard J. Durbin [D-IL], the concurrent resolution encourages the US government and other relevant stakeholders to recommit to helping developing countries obtain access to basic sanitation and safe drinking water.

Following its introduction on 14 March 2008, the resolution has passed in both the House of Representatives (10 June 2008) and in the Senate, and now takes effect. It does not require the signature of the President and does not have the force of law.

The 2008 Volta Regional International Year of sanitation has been launched in Ho with a call on the media in Ghana to give special attention to sanitation as a national issue.  The Regional Environmental Health Officer, Mr. Albert Kpodonu made the call during a press briefing and photo exhibition to highlight concerns on the sanitation in the country.

The Mayor of the Accra Metropolitan Assembly, Stanley Nii Adjiri Blankson has said that good sanitation is the foundation of health, dignity and development. He said this at the launching of the International Year of Sanitation held in Accra.

Speaking on the theme ‘Building partnership for improved sanitation’, he said sanitation issue are not the responsibility of government alone and that through partnership, great strides could be made in good sanitation delivery in the country.

The Greater Accra Regional Minister Shiek I C Quaye observed that sanitation is the basis for development in the country. “It is important therefore to give sanitation the attention it deserves”. He said there is the need to allocate more resources to sanitation and enforce sanitation bye-laws as well as promoting education in schools and homes.

Posted in Africa, Campaigns and Events