More people die from inadequate sanitation-related causes in India everyday than 10 aeroplanes filled with 200 people each. This has high economic costs. Therefore, achieving adequate sanitation is an imperative.

A summary of the report on economic impacts of inadequate sanitation in India, released on December 20, 2011, by Water and Sanitation Program (WSP) of the World Bank, shows that lack of adequate sanitation in India resulted in an annual loss of $53.8 billion ($161 billion in purchasing power parity, or PPP) or $48 per capita ($144 in PPP) in 2006, the year of evaluation in the report. This was equivalent to 6.4% of GDP in 2006. 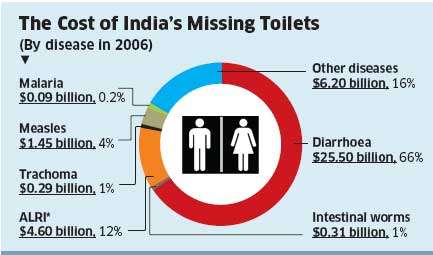 Most of these losses were related to health (71.7%; $38.5 billion), and mostly concentrated in children below five years. Other quantified economic losses from inadequate sanitation in this report relate to getting access to cleaner drinking water, time losses from not having access to sanitation, and tourism-related losses.