(01/27/11) HONOLULU – The US Environmental Protection Agency today applauds the Mayors, County Councils and residents of Maui and Kauai counties in Hawaii for enacting restrictions banning plastic shopping bags – reducing their waste and protecting the environment in a single action.

“The leadership shown by the Counties of Maui and Kauai in banning these bags will help keep their environments pristine,” said Jared Blumenfeld, EPA’s Regional Administrator for the Pacific Southwest. “This will not only decrease the amount of plastic in the counties, but it will reduce the number of bags that end up in the Great Pacific Garbage Patch – an enormous area of floating plastic waste.”

The ‘Great Pacific Garbage Patch’ refers to two areas of floating plastic waste in the North Pacific that have been identified by NOAA and many other organizations. These areas are located in both the eastern and western Pacific and are composed of marine debris. The main type of garbage in the patch is plastic litter along with other debris such as derelict fishing nets. Much of the debris is very small bits of floating plastic debris broken down through photodegradation, and surveys estimate that there may be as much as six times more plastic than plankton in parts of the garbage patch. The County of Maui and Kauai’s action will help protect many species of Pacific marine and bird life, which attempt to consume the plastic debris after mistaking it for food. 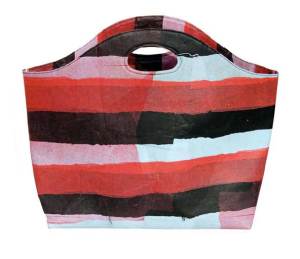 Plastic bags are a plague. They can be found in just about every corner of the planet— in fields, trees, rivers, oceans and even in the stomachs of birds and sea creatures around the globe.

They don’t biodegrade in landfills and almost every piece of plastic ever made is still in existence today.

Enter Anita Ahuja, founder and president of Conserve, based in India. Anita has come up with a way to upcycle the plastic bags plaguing her region and also help numerous people find gainful employment. The result is Conserve’s stunning range of bags made from recycled plastic. We caught up with Anita to ask her a few questions about her fashionable eco-bags and her amazing enterprise.

Please tell us a bit about Conserve.
Along with support and encouragement from my family and friends I established Conserve, a non-profit organization in 1998 with a mandate to work in the area of energy efficiency and waste management. In 2002, Conserve started working on developing an alternative recycling or rather up-cycling process that uses abundantly and freely available bags as a resource for income generation for the urban poor through their conversion into a “renewed” material which we call HRP – Handmade Recycled Plastic.

Conserve has trained people from urban slums of Delhi to process waste into recycled sheets, which is more energy efficient and environmentally friendly than conventional recycling processes. This process converts used polythene bags into a ‘renewed’ innovative material with significantly different properties and great visual appeal, without the use of any additional colour or dyes.

Conserve’s process of recycling is far more environmentally and energy friendly than the conventional plastic recycling process. Moreover, it is very good for the environment as it uses existing everyday skills of local people. Now Conserve is supporting nearly 100 rag pickers and has about 50 employees working for them.

Sanitation remains a great concern in the country’s informal settlements as many inhabitants resort to “flying toilets” in their moments of need, observed President Hifikepunye Pohamba.

Flying toilets are plastic bags slum dwellers usually use to relieve themselves after which they discard them onto the streets, alleys, ditches or even rooftops – anywhere out of sight. Out of sight, out of mind, it could be argued – but the toilets seldom remain out of sight.

Several African countries have taken bold new measures to tackle the region’s severe waste-management problems. Rwanda, Tanzania, and Uganda have passed laws banning or restricting the use of a main culprit: the ordinary plastic grocery bag. Kenya is expected to follow suit.

The bags are more than a nuisance. Blocked sewers help spread disease. Farmers complain that precious livestock are choking to death on plastic bags, ruining their livelihoods, while rubbish-strewn streets and countryside are counter-productive for Kenya’s tourism-based economy.