As of today, the #MakeRightsReal campaign is ready to be shared!

Before the campaign starts this 30 September, we are sharing information about the campaign with you – and hope you will be excited and take part!

What is the campaign about?

10 years after the human rights to water and sanitation were first recognised, the #MakeRightsReal campaign has three aims:

Speaking together, we can show the potential of human rights – and demand more recognition and support for this vital work!

And here is how you come in!

You are already using human rights in your work? You think more should be done? Here is what you can do leading up to the campaign start on 30 September:

And if you have questions, don’t hesitate to contact us!

Many WASH sector practitioners already use human rights in their work: Understanding inequalities in the enjoyment of services enables targeted planning to reach equality. With access to information for and participation by service users, their needs can be understood and met. If accountability is part of the service system, it will become more sustainable. All these are human rights principles and integrating them into practice yields results – and makes rights real!

10 years after the human rights to water and sanitation were first recognised, it is high time to focus on this practical value of human rights – and to demand that more attention, recognition and more support is given to this vital work! The #MakeRightsReal campaign aims to achieve this by showcasing experiences and demanding more action. Because it’s time to #MakeRightsReal!

We are looking forward to a great campaign start this 30 September!

Who is behind the campaign?

The campaign is intended as a neutral platform for all. It was developed by a group of WASH sector organisations: WASH United, WaterAid, Simavi, UTS Institute for Sustainable Futures, Unicef, Rural Water Supply Network, End Water Poverty. We share the interest of using the human rights to water and sanitation in practice to catalyse progress towards the realisation of services for all.

Posted in Campaigns and Events

Tuesday, 28 July, marks the 10th anniversary of the recognition of the human rights to water and sanitation!

On this day, @RealiseHRWS and @sanwatforall will take over the @WASHStrong twitter account to discuss how human rights contribute to strengthening WASH systems. We will share local and global approaches from Making Rights Real and Sanitation and Water for All.

10 years after the human rights to water and sanitation were first recognised and with 10 years to go until the promise of SDG 6 should be fulfilled, we want to use this day as an opportunity for everyone to share their experiences of applying human rights to their own work.

Joins us if you…

We hope for a lively exchange among practitioners in this space!

Posted in Campaigns and Events, Equality and non-discrimination

Organizations around the world are coming together behind a common goal of keeping governments accountable to promises made with regards to providing safe water and sanitation to all.

To support them in this work, End Water Poverty is organizing exciting conversations to cover important aspects of water, sanitation, and hygiene. These webinars are open to the public, so please share these widely amongst your networks:

– Thursday March 23rd; 3:30 PM GMT: “How to Finance an End to the Water and Sanitation Crisis”
Register here: http://bit.do/WAM-webinar-Finance

– Tuesday March 28th; 3:30 PM GMT: “How and Why to Involve Children and Youth in WASH Initiatives”
Register here: http://bit.do/WAM-webinar-Youth

Posted in Campaigns and Events, Funding

On 17 December 2015,  the United Nations General Assembly adopted by consensus a resolution which for the first time recognises the distinction between the human right to water and the human right to sanitation. The resolution also highlights the gender-specific impacts of inadequate services and includes strong language on accountability.

In early November 2015, 37 NGOs including the three mentioned above, issued a joint statement in support of the draft resolution.

Joint Statement from Amnesty International, Human Rights Watch, and WASH United on UN General Assembly Resolution 70/169 on the Human Rights to Water and to Sanitation 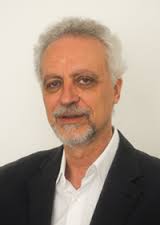 Mr. Heller, thank you for sharing your time and views with us!

The Human Right to Water and Sanitation

Water and sanitation are fundamental human rights, and the first priority should be to ‘connect’ those who so far have remained unconnected, unserved, and disadvantaged.

We shouldn’t think of people as users or consumers of a service, but as Rights Holders whose rights need to be fulfilled equally for all.
While nobody would dispute this principle, the reality is that there are limited resources, a high lifecycle cost of water and sanitation services, and many social, cultural, economic and historic barriers that constrain poor and disadvantaged people in their quest for better services and a better life.

CLTS triggering in a village in Tanzania. Photo: Jenny Matthews/WSSCC

Community-led total sanitation, or CLTS, is an approach especially prevalent in rural sanitation, however many human rights experts and academics are not convinced that CLTS is a good approach to reach people without access to sanitation.

The main objection is that it is fundamentally unfair to expect very poor people to pay for infrastructure while less poor people, especially those in urban areas, receive highly subsidised access to infrastructure and services. Secondly, there is a perception that these people are being coerced and shamed into paying for a service they might not afford, or want.

WSSCC houses the Global Sanitation Fund (GSF), a funding mechanism that builds heavily on CLTS approaches to reach millions of previously unserved people in a range of countries in Africa and Asia. It works with national governments to develop strategies and roadmaps to reach universal coverage in terms of whole districts, states and countries becoming first Open Defecation Free (ODF), and then working from there to ensure that sanitation services are sustainable and that people can move on from basic sanitation to ‘improved’ sanitation services.

First focusing on achieving ODF status is a strategic choice that is very much based on the idea of ‘Some for All’ rather than ‘All for Some’, but also takes into account that, while sanitation is in essence a private behavior, it has collective consequences. Living in an ODF environment has large impacts on people’s health, wellbeing and dignity, and on the environment.

It is true that CLTS expects people to pay, in cash or in kind, for their sanitation infrastructure. But this does not mean CLTS is a no-subsidy or ‘cheap’ approach and that governments are therefore taking the easy way out by making households pay for all the costs. CLTS is based on supporting people’s own desires to change their behaviour and to live in a clean environment. For CLTS to work well, it requires strong and sustained investment in ‘software’. It also requires public investments in hardware in schools, market places, and public buildings.

CLTS embodies the choice to not fund the initial hardware costs of constructing the latrines simply because experience has shown that that is not the most effective use of available public resources and that investing in behaviour change has a much larger potential of ensuring that people not only have access to, but also use safe sanitation services and practice related hygienic behaviour.
Where a right is very much linked to behaviour, simply focusing on the infrastructure is just not enough.

This is not to say that it isn’t a problem when people are forced to take out loans from self-help groups that they can’t afford, or when people are forced into practicing a behaviour rather than making an informed choice to do so, or that CLTS never ‘leaves out’ those most disadvantaged, most deprived, most isolated.

All these things happen, and they mean that those implementing CLTS-based programmes need to be careful, making sure that community triggering and decision making processes are as inclusive as possible, that households needing more help receive the assistance required, and that follow-up processes are designed in such a way that nobody gets left behind.

Read the full article on The Guardian. 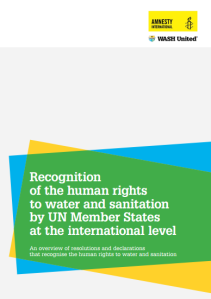 This publication gathers the evidence of the universal recognition of the human rights to water and sanitation: it gives an overview of the most important resolutions and declarations that recognise the human rights to water and sanitation, including the positions that individual states have taken when those documents were adopted. For 77 countries, it also lists their individual positions and how these have changed over time.

The document has previously served as an internal reference guide for Amnesty International and WASH United. We are publishing it to help others identify the position that their country has taken on the human rights to water and sanitation, to advocate for the rights in their own national contexts, to ensure that these rights will not be ignored in the formulation and implementation of national water and sanitation laws and policy, and to help advance strategic litigation before national, regional and international justice mechanisms.

#WorldToiletDay seminar: sanitation for improved lives of women and children

Sida and WaterAid are organising a seminar on 19 November 2014, World Toilet Day, in Stockholm, Sweden.

The Inspirational Morning Seminar on The Relevance of Sanitation and Hygiene in Addressing Children’s and Women’s Health & Rights will be held at Sida’s headquarters from 08.30-12.00.

The seminar aims to raise awareness about the taboos and difficulties surrounding sanitation specifically as it relates to health and for example girls’ and women’s menstrual hygiene management  (MHM).

The seminar moderators are Ana Gren and Johan Sundberg.

The seminar will close with a discussion followed by a joint pledge to “Break the silence, Be proud – Don’t be shy, Tell your friends”.

Register before 14 November on the Sida web site.

Posted in Campaigns and Events, Dignity and Social Development

The Republic of Panama is organizing the Third Latin American Sanitation Conference on 29-31 May 2013. The theme is:  “Universal Sanitation: New Challenges, New Opportunities”.

Latinosan is held every three years.

Latinosan 2013 consists of two events: a technical conference and a meeting of senior officials that will result in the Declaration of Panama.

For more information visit the conference website: latinosanpanama2013.com (Spanish only)

Nomathemba Neseni in June 2011 at a SuSanA side event. Photo: Flickr/SuSanA

“Sanitation is a passion, not a job,” said Noma Neseni last year at the Global Forum on Sanitation and Hygiene in Mumbai, India. “I became a human rights commissioner because of toilets. What is gender equality or poverty alleviation when we are forced to defecate in the open?”

Ms. Nomathemba (Noma) Neseni, the Director of the Institute of Water and Sanitation Development (IWSD) and Human Rights Commissioner in Zimbabwe passed away on 30 August after a short illness.

She took over the leadership of IWSD in mid-2007, after working for a number of years as Deputy Director. Ms. Neseni had extensive experience in the water and sanitation (WASH) sector, ranging from project planning to gender mainstreaming. She wrote a book [1] on WASH financing, which was published in May this year.

At IWSD, Deputy Director Mr. Lovemore Mujuru has taken up the post of Acting Executive Director.

Ms. Neseni served for many years as the National Coordinator for Zimbabwe for the Water Supply and Sanitation Collaborative Council (WSSCC), and more recently she was elected as a member of the WSSCC Steering Committee.

IWSD has been an IRC partner for many years, most recently in the ZimWASH project [2]. In 2009 Noma Neseni wrote an article [3] in IRC’s Source Bulletin about how the decline in Zimbabwe’s sanitation services eventually led to the 2008 cholera outbreak, the deadliest in Africa for 15 years.

[3] Noma Neseni, Sanitation perspectives in the new Zimbabwe. E-Source, May 2009