This is great news and fantastic to see USAID adopting and promoting this approach which aims to really track and better understand the underlying causes of poor sustainability in the WASH sector. Sustaining WASH services is complex and dependent not only the hardware (the pumps, latrines and pipes), but also a range of the so-called software elements, for example reliable management entities, long-term external support and monitoring, adequate financing and so on. Measuring coverage is one thing, looking at functionality is also a useful proxy, but if we really want to know where the pinch-points are and how something so seemingly simple as water flowing out of a tap can fall down, it requires a comprehensive and powerful tool. 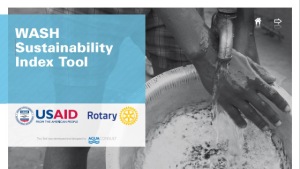 This is just what USAID and Rotary International have developed with the new Sustainability Index Tool, or SIT, which has just been released and is available for download on the WASHPlus website here. The tool was developed by Aguaconsult over a period of more than a year and a half and has been tested in three country programmes, with a further two countries being rolled out in the coming months.

END_OF_DOCUMENT_TOKEN_TO_BE_REPLACED

The USAID-Rotary International H2O Collaboration was launched in March 2009, and the first round of pilot projects were finalized in 2012 in the Dominican Republic, Ghana, and the Philippines. The central goal of this collaboration between Rotary International and USAID is to support water, sanitation, and hygiene initiatives that will have lasting impacts in target communities.The partnership between Rotary International and USAID is an official Global Development Alliance (GDA), which is an innovative public-private alliance model developed and used by USAID for improving social and economic conditions in developing countries.

One outcome of the Alliance is the publication of theSustainability Index Tool documents which are listed below:

Rotary clubs will be helping train engineers and scientists to solve problems in water and sanitation, particularly in developing countries, through a new strategic partnership between The Rotary Foundation and UNESCO-IHE Institute for Water Education.

Through the partnership, the Foundation will offer packaged grants that Rotary clubs may use to select and sponsor scholarships for professionals in the water sector. Up to eight students a year may be chosen for any of three master of science programs at the institute in Delft, the Netherlands.

END_OF_DOCUMENT_TOKEN_TO_BE_REPLACED

The USAID – Rotary San Fernando City Sewerage and Septage Management Project is a USAID-Rotary International H2O Collaboration Project that aims to address the sanitation problem in this lone city of the province.

This issue is a big health risk challenge for San Fernando the fact that drinking water wells which underwent samplings showed widespread contamination that threatens a huge area with water-borne bacteria.

Though many of the residents would want to dislodge their septic tanks, the high cost of the service which is one of the highest in the country hinders them.

Project cost amounts to about P25.46 million, with a shared breakdown of P5 million from Rotary International, P0.46 million from USAID, and a counterpart of a concrete road, lot with an area of 1.2 hectares and fencing amounting to P20 million from the City of San Fernando.

Congressman Ortega said in his speech that this is “another milestone for the city of San Fernando” and to show his full support to the project, he pledged to give P2million of his countryside development fund (CDF) provided the said fund won’t be sliced in the House of Congress.

He urged the people to support all projects that concern the environment, for the city to be a citizen and environment-friendly city.

Ambassador Thomas made a stress in his speech that “an investment of a clean water and sanitation is an investment to the economy, and USAID is a proud partner in protecting health, the environment and the citizens of this country.”

After the program proper, Thomas spearheaded the groundbreaking and laying of the time capsule together with Cong. Ortega, Mayor Ortega, Mr. Roderick So and all the local officials and Rotarians present.

Rotary International’s membership magazine The Rotarian has featured many provocative humanitarian concerns on its cover in the past few years, but it hit a new mark in the January [2010] issue. 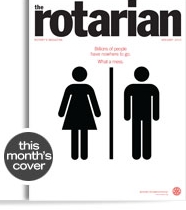 The cover features a schematic drawing of a man and a woman, the type that is found on public restroom doors, and the words, “Billions of people have nowhere to go. What a mess.”

The article by Rose George tells in excruciating detail what it’s like in places where there is literally nowhere to do what human beings do several times a day except the side of the road or beside a tree in the woods. This “problem no one wants to talk about” is actually one of the world’s major health problems, she argues, affecting 2.6 billion people who have no sanitary toilets.

Why? Because the bacteria in human feces left out in the open are carried about on hands and feet into living spaces. “It finds its way into food and drink, with desperate consequences,” George writes. “Diarrhea — 90 percent of which is caused by contaminated food or water — kills up to two million people a year, most of them children.”

Even so, the taboo nature of the topic and cultural differences that prevent uneducated people from accepting the convenience of a sanitary toilet are tough to break through. George notes that the framers of the United Nations Millennium Development Goals included sanitation in the goals with reluctance, even though preventing diarrhea would enhance the eagerly embraced goals of universal primary education, eradicating extreme poverty and hunger and reducing child mortality.

Money and government concern won’t solve the problem alone, however. George tells of a failed attempt by the Indian government to introduce new sanitary latrines in the 1980s. They went unused “at least for their intended purpose,” she writes. “Maybe because they were nicer than people’s houses, so they were turned into extra storage spaces or temples.” She explains that installing new “hardware” has to be accompanied with “software”: human psychology and language to get people to embrace the sanitary toilet and abandon the old ways.

Rotary Clubs have been involved in public sanitation almost since the first club was established by Paul Harris in Chicago in 1905. The club’s very first public service project in 1907 was building “comfort stations” outside Chicago’s City Hall. Many clubs have supported international sanitation projects, the most successful of which are done in partnership with local leaders.

[The Rotary Foundation has granted more than US$4.7 million for water and sanitation projects over the past five years. An accompanying article by Jenny Llakmani, describes some of Rotary International’s sanitation projects and the technology options used].

We expect this cover article will get lots of Rotary Clubs talking about sanitation projects in remote corners of the world. George suggests enlisting celebrities “who happily promote a clean and shiny water faucet in a dusty village, with a photogenic child in tow, but don’t bother to take a few steps over to the latrine that has enabled that child to go back to school and prolonged her life.”

Need a new cause, Brad and Angelina? Or how about Tiger Woods? After all, he’s taking a break from golf and needs to rehabilitate his reputation.

Seriously, we hope this provocative Rotarian cover story brings attention to an uncomfortable subject that sorely needs addressing. Think about it. If the indoor toilet in your home or place of work mysteriously disappeared, where would you go?

Posted in Sanitation and Health