More funding for a local government-led approach introduced in 2008 by SNV and IRC to scale up sanitation from community to district level.

The UK’s Department for International Development (DFID) has awarded SNV Netherlands Development Organisation a €28 million (US$ 32 million) service contract to fund the Sustainable Sanitation & Hygiene for All (SSH4A) Results Programme. Introduced by SNV and IRC in 2008 in Nepal, Bhutan, Cambodia, Viet Nam and Laos, SSH4A is a comprehensive, local government-led approach to scale up sanitation from community to district level. 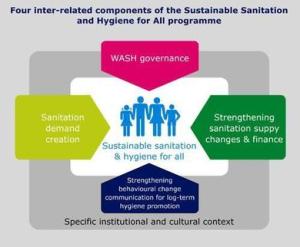 SSH4A programmes have been implemented with rural communities in 15 countries across Asia and Africa. In Asia, more than 2.2 million rural people have been reached, of whom 700,000 received improved sanitation.