Investing in Menstrual Health and Hygiene

Leading global health organizations have unveiled a groundbreaking analysis outlining what donors, national governments, and the private sector need to invest to accelerate progress for menstrual health and hygiene (MHH). The report, Making the Case for Investing in Menstrual Health and Hygiene, is part of a growing effort to advance gender equality and contribute to achieving the Sustainable Development Goals.

Tuesday, 28 July, marks the 10th anniversary of the recognition of the human rights to water and sanitation!

On this day, @RealiseHRWS and @sanwatforall will take over the @WASHStrong twitter account to discuss how human rights contribute to strengthening WASH systems. We will share local and global approaches from Making Rights Real and Sanitation and Water for All.

10 years after the human rights to water and sanitation were first recognised and with 10 years to go until the promise of SDG 6 should be fulfilled, we want to use this day as an opportunity for everyone to share their experiences of applying human rights to their own work.

Joins us if you…

We hope for a lively exchange among practitioners in this space!

Posted in Campaigns and Events, Equality and non-discrimination

This publication gathers the evidence of the universal recognition of the human rights to water and sanitation: it gives an overview of the most important resolutions and declarations that recognise the human rights to water and sanitation, including the positions that individual states have taken when those documents were adopted. For 77 countries, it also lists their individual positions and how these have changed over time.

The document has previously served as an internal reference guide for Amnesty International and WASH United. We are publishing it to help others identify the position that their country has taken on the human rights to water and sanitation, to advocate for the rights in their own national contexts, to ensure that these rights will not be ignored in the formulation and implementation of national water and sanitation laws and policy, and to help advance strategic litigation before national, regional and international justice mechanisms.

Handwashing and menstrual hygiene were promoted at a major global sports event, thanks to a partnership between WASH United and the International Cricket Council (ICC).

WASH United raked in Indian cricket superstar Suresh Raina to become their brand ambassador at the ICC World Twenty20 Cricket World Cup, which was held from 16 March to 6 April, 2014, in Bangladesh. 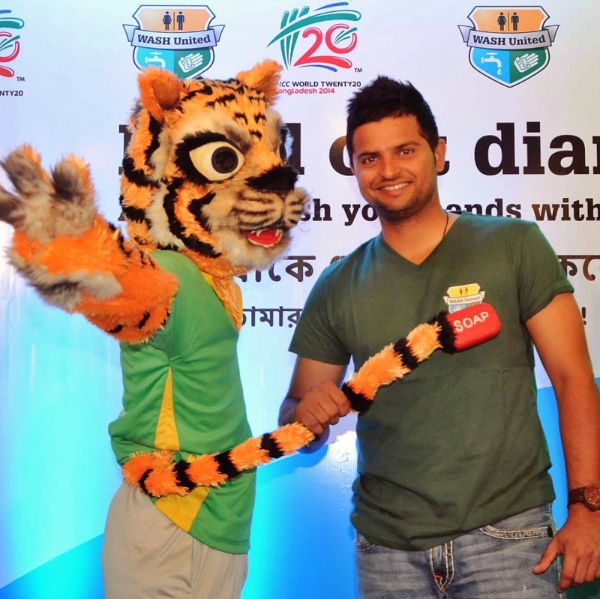 END_OF_DOCUMENT_TOKEN_TO_BE_REPLACED

“If women can have moustaches we can all talk about menstruation”. With this message WASH United kicked off May MENSTRAVAGANZA, a 28-day campaign to raise awareness and break the silence around menstruation and menstrual hygiene.

WASH United is one of the 12 finalists in Ashoka’s Changemakers ”Changing Lives Through Football” Competition.

Set up by set up by German NGO Brot für die Welt, WASH United uses the power of football to catalyse social change and engage top international and African football stars as role models to promote safe drinking water, sanitation and hygiene for all in Sub-Saharan Africa leading up to and following the 2010 World Cup.

“Winning the competition would not only mean to raise the profile of our campaign, but also help to fund our work for safe drinking Water, Sanitation and Hygiene (WASH) for all people, everywhere”, says WASH United.

Read more about the competition.

Hamburger SV football player Jonathan Pitroipa played the “World Toilet Cup” game in his home country of Burkina Faso where he launched the WASH United campaign on 4 June 2010. First introduced in November 2009 during the second Africa Water Week in Johannesburg, South Africa, the “World Toilet Cup” game makes a symbolic effort at tackling the sanitation crisis in Africa by trying to kick as many brown “poo balls” as possible into latrines and toilets.

In addition to activities in the WASH United target countries, there are also targeted activities taking place in Europe to raise awareness for the importance of water and sanitation among the general public and political decision makers.

Besides WASH related games like the “World Toilet Cup”, WASH United has developed promotional posters and Public Service Announcements (PSAs) for radio and TV. There are briefing papers for each target country aimed at decision makers, and there is a curriculum (consisting both of classroom materials and football-based games) that uses the power of football and the role model status of the football stars.

To join WASH United, either as an individual or an organisation go to www.wash-united.org