A new short video “Wastewater: A widespread threat and missed resource” highlights the impacts of wastewater on coastal communities and ecosystems, and the benefits of improving its management. It is part of a series of ocean awareness videos titled Two Minutes on Oceans with Jim Toomey,  a collaboration between the popular American cartoonist Toomey and the United Nations Environment Programme (UNEP).

Oct. 20, 2010 – There are plenty of high-tech ideas to tackle pollution, but recent research suggests that some of the biggest gains in keeping our waterways clean could come from a more traditional technology – fences.

Simply fencing off streams and drainage ditches so farm animals can’t deposit manure in and around them could cut levels of faecal pollution dramatically, according to scientists. This would protect the health of people exposed to river water and help Britain comply with EU rules on water quality.

The researchers created a model of the various factors that lead to faecal pollution – and the harmful bacteria it contains – in rivers. They then used the model to work out how effective different methods aimed at cutting faecal pollution would be, using the Humber river basin as a case study.

Fencing off streams came out ahead by a big margin – the model suggests that by the time water flows out of a region of intensive dairy farming, its E. coli concentrations would be 58.59 per cent lower with fenced streams than without. As well as keeping animals away, the fences encourage the development of an overgrown riverbank zone which can help filter out faecal matter that’s washed off fields.

This is just one of several possible ways to address the problem. ‘But animals having direct access to the water seems to be one of the major risks,’ says Danyel Hampson, a PhD student at the University of East Anglia and lead author of the paper, published in Water Research. ‘The simple solution of fencing off cattle from rivers is probably one of the most effective ways farmers have of reducing faecal matter contaminating watercourses. From the farmer’s point of view, it is a solution that they can get on and do.’

Alternatives may be less effective, more expensive and more disruptive for farmers. For example, reducing the number of dairy cows in the area, the second-most-effective measure, would only lead to an 11.58 per cent reduction. The third-most-effective, cutting fertiliser use by 20 per cent to make grass less nutritious so that fewer cows can be kept on it, would cut bacterial rates by less than ten per cent. Both these measures would probably be much more painful for farmers.

END_OF_DOCUMENT_TOKEN_TO_BE_REPLACED

Protests drawing up to 10,000 people flared in eastern China over a powerful stench from a sewage treatment plant with 10 people hurt in clashes, residents and a human rights monitor said [on 1 September 2009].

A statement by the local Communist Party’s propaganda department acknowledged the protests, saying when workers prepared to enter the factory they were obstructed by villagers.

[A] report by the state-run Straits Metropolitan News […] also described the hostage-taking and clashes, but said only about 200 protesters were involved. “A small number of people took advantage of the situation to cause trouble, damaging and smashing equipment,” it said, citing information from the city government.

The wastewater treatment plant had a problem that sent a major stench through the area on Aug. 19 [2009], the statement said. Villagers protested over several days, but the biggest demonstration came [on 31 Aug. 2009]. One resident […] said the stench was unbearable. “People would puke or faint when they smell it.”

Mass protests over pollution and other environmental problems occur regularly throughout China.

New cases of cholera are being recorded amid fears of an increase in the spread of the disease as the long rains start. Already, cases have been reported in 17 districts, according to a senior health official. “At least 176 cases of acute watery diarrhoea [AWD] have been reported in Kipsing [north of the eastern district of Isiolo]; of these, at least three have tested positive for cholera,” Shahnaaz Sharif, the director of public health and sanitation, told IRIN. “Some 1,097 AWD cases have been reported nationally since late 2008, of which 137 have tested positive for cholera,” he said.

[…] “Because of the current drought, residents are using untreated water from boreholes that just three months ago had been submerged,” Titus Mung’ou, Kenya Red Cross Society (KRCS) communications manager, told IRIN, adding that limited latrine coverage and cross-border interaction had fuelled the spread.

Mung’ou expressed concern that the spread of the disease would be exacerbated should the rains bring floods. In late 2008, floods submerged hundreds of latrines and contaminated water sources in the northeast, with cases of diarrhoea reported.

High water-table levels in some of the affected areas increased the risk of contamination, he said.

The province of Nyanza is also facing its third outbreak of cholera since December 2007, with the districts of Kisumu East and West, Nyando, Rachuonyo, Homa Bay, Migori, Suba and Rongo affected, according to KRCS. Cases have also been reported in Kakamega, in Western Province, and Athi River, near Nairobi.

Mung’ou said the outbreak in Kisumu East was due to the contamination of water sources by municipal and residential waste and a lack of proper drainage. Seepage from latrines into wells was also a risk factor in the Nyanza region.

KRCS and Ministry of Health teams are carrying out water purification and trucking in affected areas.

Posted in Africa, Sanitation and Health

A few years ago, Charles Kyagaba used to sell up to 300kg of fresh fish at the Gaba landing site near the Ugandan capital of Kampala each day, but now the situation is markedly different.

According to environmentalists, over-fishing, pollution and other human activities along Lake Victoria as well as climate change are threatening to destroy Africa’s largest freshwater lake resource.

Frank Mulamuzi, an environmental advocate and executive director of the Ugandan NGO, the National Association of Professional Environmentalists (NAPE), said the lake was mainly threatened by pollution. Across the three East African nations, the lake had become a reservoir for excessive untreated effluents, including sewage, industrial waste and other chemicals.

June 18, 2008: The Nairobi Metropolitan Development ministry has entered into a technical arrangement with Unep to bring rapid results in green initiatives. The two immediate projects on their agenda are cleaning up of the Nairobi River and solid waste management.

Previous attempts to tackle the twin problems suffered from private sector apathy and lack of political will. “I feel this time it will work because of the political commitment which was not previously there,” said Achim Steiner, the Unep executive director.

The new ministry needs up to Sh4 billion to clean-up the 200km stretch covered by the three rivers passing through the capital city.

It also faces the challenge of coming up with innovative ways to manage solid waste which is an eyesore with only one dumping site in Dandora , on the outskirts of the city. 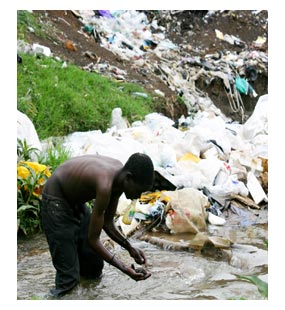 The Yamuna is the largest tributary of the revered Ganges, but its polluted waters pose an increasing health hazard to the Indian capital. Now campaigners are calling for urgent action to clean it up.

The Yamuna, which passes through Delhi, represents both a terrible irony and one of India’s great unsung scandals. The largest tributary of the revered Ganges, the Yamuna is one of the country’s most sacred rivers, and yet perhaps also its dirtiest. Hundreds of millions of pounds of public and private money has been spent on projects to clean the river and yet where it passes Delhi it is dark, stinking and lifeless – as dead as a handful of ashes.

“It’s a terrible irony. In the Hindu religion we are supposed to venerate rivers. The Yamuna is one of the most worshipped,” said Vimlendu Jha, who heads a campaign group called We For Yamuna. “And yet every day 950 million gallons of sewage is pumped into the river. The faecal coliform [bacteria from human waste] count is 100,000 times what is considered safe for bathing… No politician wants to do anything. It has gone from bad to worse.”

China cracks down on water polluters with new law

WONDERFONTEINSPRUIT , 15 February 2008 (IRIN) – One legacy of South Africa’s extensive mineral deposits is the infrastructure and wealth of the country. But another more troubling legacy is emerging as an increasingly urgent problem: environmental contamination – heavy metals and radioactive elements – from over 100 years of mining that could severely pollute the country’s water, affecting the food chain and citizens’ health.

The epicentre of the problem lies southwest of Johannesburg in a valley ringed by mines – both active and closed – where a small river called the Wonderfonteinspruit runs southwest from the mining town of Randfontein to Carletonville and Khutsong, and into the Mooi River, which provides water for Potchefstroom, a large university town.

China Offers Plan to Clean Up Its Polluted Lakes

HONG KONG (23 Jan 2008) — The Chinese government unveiled a detailed plan on Tuesday to limit pollution in China’s lakes by 2010 and return them to their original state by 2030.The State Council, China’s cabinet, ordered strict regulation of the release of wastewater, the closing of heavily polluting factories near lakes, the improvement of sewage treatment facilities and strict limits on fish farms, according to the official Xinhua news agency.