Official United Nations figures claim that 2.5 billion people lack access to adequate sanitation. But new research from the University of North Carolina puts the total at more than 4.1 billion people.

As world leaders and grassroots groups discuss how to reduce poverty and improve lives, debates over precise definitions and accurate measurements are taking on a new urgency. The agenda-setting Millennium Development Goals expire in 2015, but already new definitions for water, sanitation, and hygiene — called WASH by insiders — seek to influence the post-MDG global development agenda. 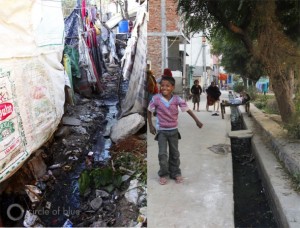 The open sewer of Vasant Kunj B5 (left) — one of Delhi’s hundreds of slum villages, this one home to 5,000 people — is a trench dug out of the dirt that runs between lean-to homes made from old grain bags and a few bricks. Nearby, the 10,000 residents of Dwarka Sector 16 (right) worked with a local NGO to line their open sewer with concrete.

Last month, the Water Institute at the University of North Carolina, Chapel Hill, challenged official statistics from the United Nations on the number of people without proper toilet facilities: UNC put the figure at 4.1 billion people, compared with 2.5 billion claimed by the United Nations. Both figures assessed conditions in 2010.

The discrepancy between the two sets of sanitation figures comes from different accounting methods. The United Nations measures hardware — the toilet, in this case — and how well it protects the user from immediate contact with the waste. The UNC researchers, on the other hand, approached the question from a public health angle: they also considered hardware, but in a broader sense, by asking whether or not the sewage is treated.

“We looked at public health and the environment beyond just the user,” Rachel Baum told Circle of Blue. Baum is a co-author on the paper, which was published online in January in the journal Environmental Science and Technology.

Baum and her colleagues wondered, “Is sanitation protecting the wider community?”

More often than not, they found, the answer is no. In 2010, some 4.1 billion people — six out of every 10 people on the planet — did not use toilet facilities that ultimately treat the sewage before it is returned to the environment.*

This is the second time in less than a year that the Water Institute has challenged WASH statistics from the United Nations. In March 2012, a study published in theInternational Journal of Environmental Research and Public Health found that 1.8 billion people drink unsafe water — a figure that is more than double the 780 million people who lack access to an improved water source, according to the United Nations Joint Monitoring Program’s 2012 update.

Again, the discrepancies come from the way in which the data is collected: the United Nations defines access to drinking water in terms of infrastructure — in other words, the taps, pipes, and wells used to deliver water — rather than water quality, as measured by the Water Institute.

Having set the agenda since 2000, there areeight Millennium Development Goals that will expire in 2015. WASH issues are included in the MDG to “ensure environmental sustainability.”

Last year, the United Nations declared that, according to its metrics, the world had achieved the MDG for drinking water in 2010. The sanitation target is not likely to be achieved, according to an August 2012 update. Both goals sought to halve the proportion of people without access to improved drinking water and sanitation from a 1990 baseline.

The definitions — and the discrepancies between the definitions — of access and quality matter. The United Nations is now discussing which items will comprise the global development program after 2015, when the eight Millennium Development Goals expire.

At stake in the next round of goal-setting is a place in the global-aid pecking order and a chance at the rivers of cash that flow toward the top priorities. Development aid for drinking water and sanitation reached $US 7.8 billion in 2010, and loans to the sector added an additional $US 4.4 billion that year, according to the United Nations.

John Oldfield, the CEO of WASH Advocates, said that priorities are already changing, with less money spent on drilling wells and installing pumps; instead, more cash is being allocated to building maintenance and financial skills within the communities that will manage the water and sanitation projects after the donor leaves.

But John Sauer, head of communications for the Denver-based nonprofit Water for People, said he did not know if the UNC study would lead to a big shift in how money is spent. The broader issue, he told Circle of Blue, is that sanitation coverage is expanding much too slowly, and the progress that has been made is not well monitored, to see if it is sustainable.

Better Outcomes This Time Around

Everyone with a stake in the new order is offering recommendations during the run up to 2015.

On February 21, the United Nations and a handful of its partner organizations issued a press release arguing that the new development goals for water and sanitation should focus on people on the margins: children, women, and those who live in slums or with disabilities.

“The post-2015 agenda must not move forward without clear objectives towards the elimination of discrimination and inequalities in access to water, sanitation, and hygiene,” according to the statement.

Yet, it is still early in the negotiations, and the players are jockeying for position.

“We can’t say at this point what the U.N. will recommend,” Pragati Pascale, communications officer for the United Nations, told Circle of Blue. “There are a lot of discussions going on, trying to hear from many voices.”

February 17 marked the wrap-up of a five-week public consultation on water and sanitation goals, an initiative sponsored by the United Nations and civil society groups. And coming up in May, a star-studded panel — chaired by the leaders of Indonesia, Liberia, and the United Kingdom — will present its assessment of the MDG successes, failures, and inadequacies.

Baum said she hopes that last month’s UNC sanitation study brings more attention to what effective sanitation really is. Meanwhile, Oldfield told Circle of Blue that these types of studies can result in stronger definitions of the problem, in addition to better outcomes.

“This paper will enable stronger policies and it will inform the consultative process,” Oldfield said. “Universal coverage for sanitation is the goal, and this will help us define what exactly we mean by ‘universal coverage.’”

*Note: The researchers pulled sewage treatment data from the United Nations Statistics Division, the Food and Agricultural Organization (FAO), the European Commission’s Eurostat, and the Organization for Economic Cooperation and Development.