The Human Right to Water and Sanitation

Water and sanitation are fundamental human rights, and the first priority should be to ‘connect’ those who so far have remained unconnected, unserved, and disadvantaged.

We shouldn’t think of people as users or consumers of a service, but as Rights Holders whose rights need to be fulfilled equally for all.
While nobody would dispute this principle, the reality is that there are limited resources, a high lifecycle cost of water and sanitation services, and many social, cultural, economic and historic barriers that constrain poor and disadvantaged people in their quest for better services and a better life. 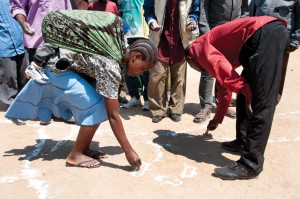 CLTS triggering in a village in Tanzania. Photo: Jenny Matthews/WSSCC

Community-led total sanitation, or CLTS, is an approach especially prevalent in rural sanitation, however many human rights experts and academics are not convinced that CLTS is a good approach to reach people without access to sanitation.

The main objection is that it is fundamentally unfair to expect very poor people to pay for infrastructure while less poor people, especially those in urban areas, receive highly subsidised access to infrastructure and services. Secondly, there is a perception that these people are being coerced and shamed into paying for a service they might not afford, or want.

WSSCC houses the Global Sanitation Fund (GSF), a funding mechanism that builds heavily on CLTS approaches to reach millions of previously unserved people in a range of countries in Africa and Asia. It works with national governments to develop strategies and roadmaps to reach universal coverage in terms of whole districts, states and countries becoming first Open Defecation Free (ODF), and then working from there to ensure that sanitation services are sustainable and that people can move on from basic sanitation to ‘improved’ sanitation services.

First focusing on achieving ODF status is a strategic choice that is very much based on the idea of ‘Some for All’ rather than ‘All for Some’, but also takes into account that, while sanitation is in essence a private behavior, it has collective consequences. Living in an ODF environment has large impacts on people’s health, wellbeing and dignity, and on the environment.

It is true that CLTS expects people to pay, in cash or in kind, for their sanitation infrastructure. But this does not mean CLTS is a no-subsidy or ‘cheap’ approach and that governments are therefore taking the easy way out by making households pay for all the costs. CLTS is based on supporting people’s own desires to change their behaviour and to live in a clean environment. For CLTS to work well, it requires strong and sustained investment in ‘software’. It also requires public investments in hardware in schools, market places, and public buildings.

CLTS embodies the choice to not fund the initial hardware costs of constructing the latrines simply because experience has shown that that is not the most effective use of available public resources and that investing in behaviour change has a much larger potential of ensuring that people not only have access to, but also use safe sanitation services and practice related hygienic behaviour.
Where a right is very much linked to behaviour, simply focusing on the infrastructure is just not enough.

This is not to say that it isn’t a problem when people are forced to take out loans from self-help groups that they can’t afford, or when people are forced into practicing a behaviour rather than making an informed choice to do so, or that CLTS never ‘leaves out’ those most disadvantaged, most deprived, most isolated.

All these things happen, and they mean that those implementing CLTS-based programmes need to be careful, making sure that community triggering and decision making processes are as inclusive as possible, that households needing more help receive the assistance required, and that follow-up processes are designed in such a way that nobody gets left behind.

Read the full article on The Guardian.