NAIROBI (AlertNet) – Medical scientists and environmental activists are urging the Kenyan government to speed up efforts to tackle climate-related diseases, which are on the rise in the east African nation.
The $15 billion national budget announced in June includes a strategy for responding to climate change with funding for projects to expand irrigation activities in dry areas and improve water quality, for example.
But some experts think it doesn’t go far or fast enough. A group of scientists has joined forces with the Forest Action Network (FAN) and Kenya Medical Research Institute (KEMRI) to lobby for urgent measures to deal with the impact of warmer temperatures and unpredictable rains on health. 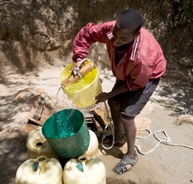 Research carried out by KEMRI suggests waterborne diseases and malaria are on the rise, with the country’s recent drought making matters worse. In the northern region of Turkana, for example, communities have had to rely on shallow wells for their drinking water, which are often dirty.

Dominic Walubengo of FAN told AlertNet the civil society coalition hopes a draft policy strategy it has submitted to several politicians will be discussed in parliament by the end of the year, and form the basis for new laws to address the negative health effects of climate change.

Hopes for tougher action on environmental issues are rising as Kenya’s new constitution – approved in a referendum earlier this month and due to be promulgated on Friday – is regarded as more supportive of green policies.

The three-year drought, which eased with better short rains late last year, has also added to the urgency, as meteorologists fear another prolonged dry spell could be on the way.

Walubengo noted a rapid increase in waterborne diseases earlier this year, including cholera and diarrhoea, which can harm children’s longer-term health. Persistent diarrhoea leads to malnutrition and stunted growth, which can in turn undermine cognitive development, including education and productivity, according to KEMRI.

“As water shortages persist, people will use dirty water for drinking and domestic purposes,” said Walubengo. “Already, the last month has been so dry that even the once-abundant ground water has been over-exploited.”

Communities should look to techniques such as water harvesting so as not to waste the rain when it does come, he added.

Planned government policies to boost water quality include the use of technologies such as recycling used water and sewage treatment facilities.

THREAT OF DIARRHOEA
Research conducted jointly by KEMRI and the U.S. Centers for Disease Control suggests that waterborne diseases like diarrhoea, typhoid and cholera will overtake malaria as the country’s biggest health problem by 2020 as climate change brings more extreme weather, including droughts and torrential rain.
“Flooding tends to overload sanitation services, while in times of drought, people cannot get fresh water making it harder to maintain hygiene,” explained Shahnaaz Sharif, the government’s director of public health and sanitation.

Diarrhoea is of particular concern during water shortages, the doctor noted. Higher temperatures allow the bacteria that cause it to replicate faster.

“Even when the government spends plenty of money educating the public on matters such as hand washing and sanitation, they do not take these issues seriously,” he said, noting that the highest risk areas are slums and other informal settlements.

According to figures from the ministry of public health and sanitation, diarrhoea killed more than 5,000 children under the age of five last year, although Sharif said the number of deaths had been reduced by around a third since 2003.

Deaths from other waterborne diseases are far lower, but are also a serious public health threat, Sharif said, adding that the government has launched water and sanitation projects in many slum areas.
Since 2003, treatment for malaria, HIV and childhood illnesses including diarrhoea has been provided free to all Kenyans, thanks to funding from international donors such as the Global Fund to Fight AIDS, Tuberculosis and

MALARIA
But pressures from climate change could undermine recent improvements.

“Climate change is a problem to health management despite strong government efforts to improve on health services in the last seven years,” Sharif said.

He warned that deaths from cholera – now at around 1,000 per year – could jump if shortages of clean water persist.

Even some hospitals do not have an adequate water supply to care for their patients, partly because of antiquated piping systems. In response, the government has begun allocating funds to renovate and replace pipes in more than 60 facilities around the country, according to a junior government employee who did not wish to be named.

NEW MALARIA ZONES
Malaria is also on the rise in Kenya, as warmer temperatures and changing rainfall patterns create new breeding grounds for mosquitoes. The disease is being reported in places where it rarely used to be found, including the capital and highland zones.

“Malaria cases had reduced in the last few years because of effective treatment guidelines introduced by the government. But we are witnessing new malaria cases and deaths in areas that were thought to be malaria-free,” said leading scientist Onesmo Ole Moyoi, who works with the Nairobi-based International Center of Insect Physiology and Ecology, a tropical research organisation he previously headed.

Moyoi explained that higher temperatures encourage mosquitoes to bite more often, as well as speeding up the development of the malaria parasite inside the insect.

In the past several months the disease has begun spreading into northeastern Kenya, according to Moyoi. He said the region is poorly prepared to deal with malaria because its residents have low immunity and the drugs needed to treat it are hard to come by.