In Burkina Faso the political commitment for sanitation is unequivocal

The first lady of Burkina Faso has pledged her support for the “Fasotoilettes 2017” campaign.

IRC and their partners have been saying it for years: to achieve universal sanitation by 2030 (SDG6-2), the commitment of all stakeholders is essential – from the top to the active participation of citizens at grass roots level. We all remember that the President of Burkina Faso made water and sanitation a priority in his electoral campaign and since his election the Government has continued to show its commitment to sanitation and supports the participatory approach promoted by many NGOs by calling on all the citizens of Burkina to get involved.

And on 23 January, it is the wife of the President, Mrs. Sika Kaboré, who added her voice to this movement, showing the importance she accords to the subject by joining the people’s campaign for toilets, “FASOTOILETTES 2017“, presiding the opening ceremony.

Initiated by IRC Burkina Faso and in collaboration with the General Directorate for Sanitation of the Ministry for Water and Sanitation, the NGOs WaterAid and Eau Vive International as well as the Foundation Kimi, this campaign calls on Burkinabe citizens to help each other, in solidarity, so that everyone can have access to decent sanitation facilities. Indeed, in Burkina Faso, 9.3 million people still defecate in the open on a daily basis. Seventy percent of hospital beds are taken by people suffering from illnesses caused by a lack of sanitation and every day 4.8 million women risk their safety, dignity and their health because they are forced to hide in the bush to relieve themselves. This situation is unacceptable and distressing. Mrs Kaboré made it quite clear in her opening speech: “Relieving oneself is a basic need of all human beings… I am deeply disturbed when I think of all the women who have to wait until nightfall to do what is ultimately natural”. Indeed, we should all be indignant and mobilise to change this situation. 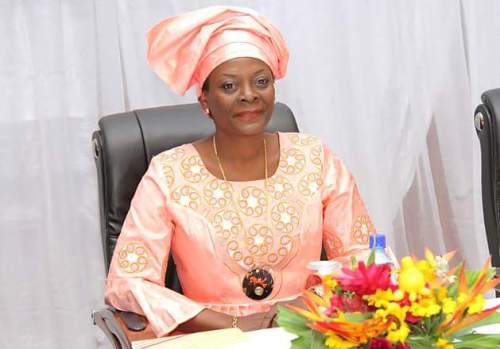 Madame Sika Kaboré, Wife of the President of Burkina Faso and Chair of the Launch Ceremony

The campaign is supported by the renowned and much loved singer in Burkina Faso and around the world, Sana Bob, the campaign’s artistic ambassador. He has even composed a song that decries the way Burkinabe wait for external aid to help them, singing “we cannot beg for food and then beg for toilets! Where is our dignity as Burkinabe citizens?!” Mrs Kaboré added her voice, reminding the audience that “Solidarity is a cornerstone of our life in society. As such, I would like to urge you all to show a great wave of solidarity that will go down in the history of our country through the construction of toilets for our friends and family, and everywhere there are people dwelling.” To encourage the Burkinabe to get involved, a national Tombola has been begun to reward the actions of solidarity. More information about this Tombola will be available shortly.

This highly commendable initiative has been widely relayed by the Burkinabe press through more than 15 sites and newspapers. A few of the articles and some project documents are available [in French] on the IRC website, where this blog was originally published.